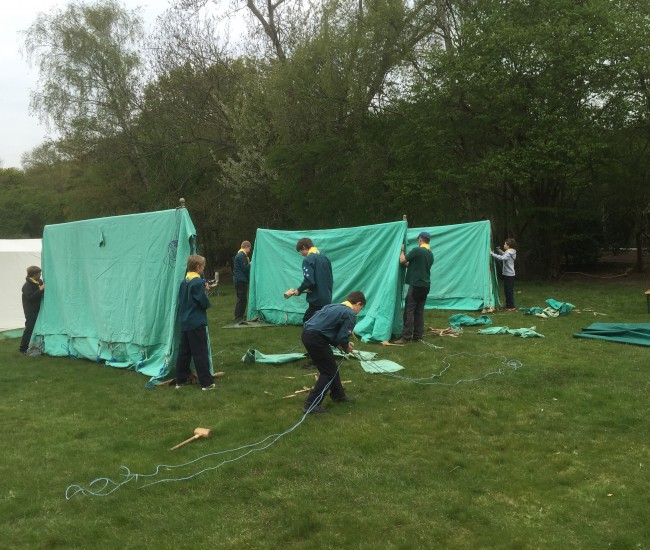 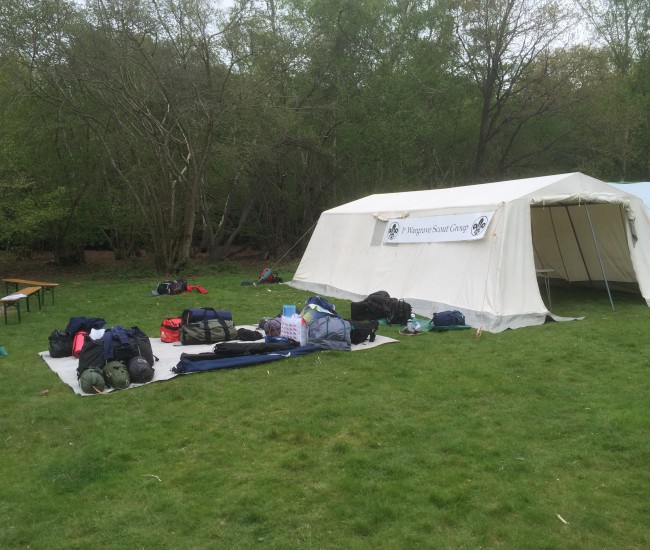 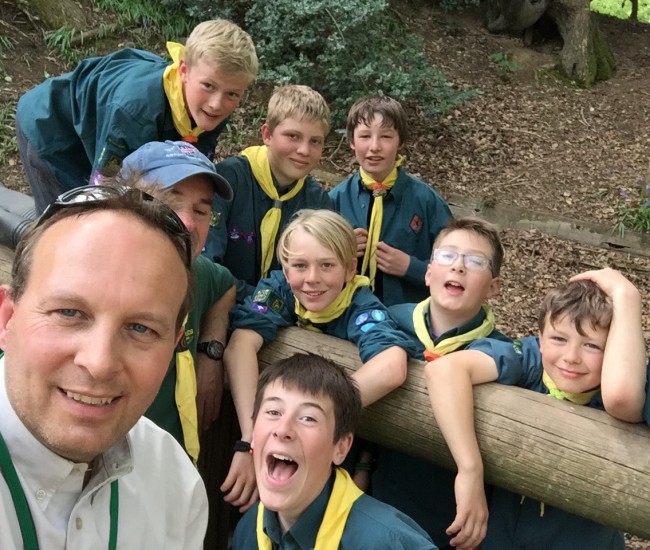 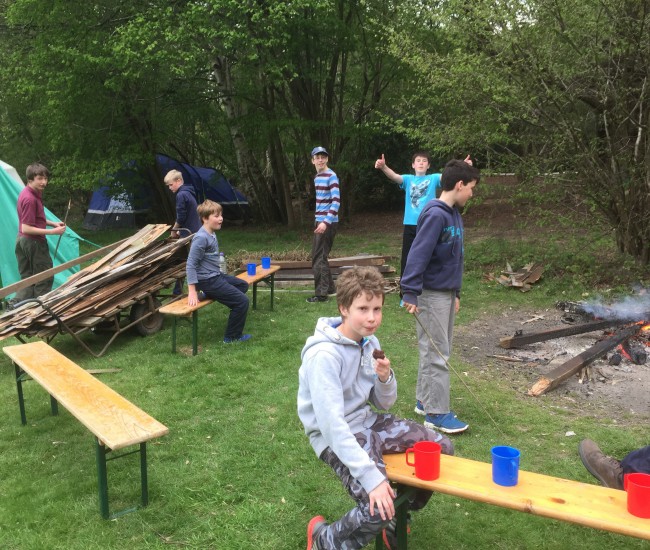 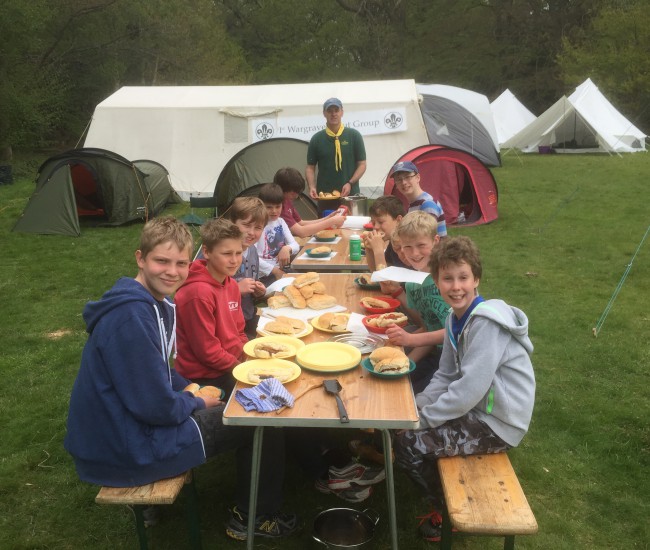 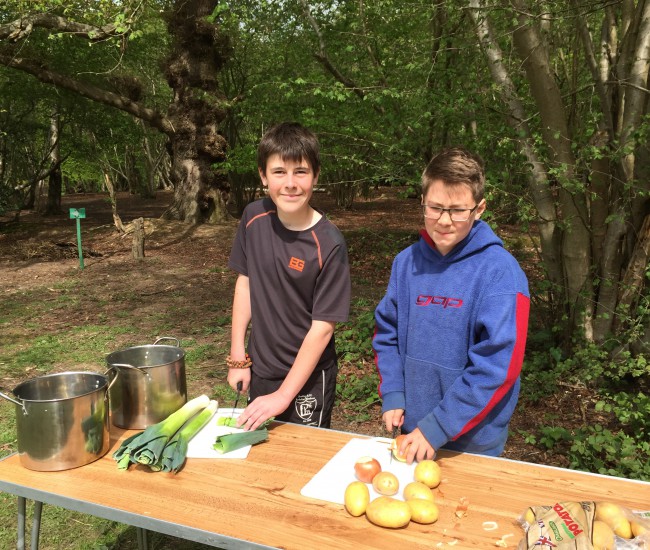 Earlier in the year, 1st Wargrave scouts enjoyed a fantastic 2-night weekend camp over the First May Bank Holiday (2nd to 4th May). Over 70 scouts and 20 leaders (including 14 scouts and 4 leaders from Wargrave) attended the Loddon District “Big Camp” Camping Challenge, which took place at the Dorneywood Scout Campsite in Burnham Beeches (where we camped last October for our Autumn Survival Camp).

The weather during the weekend was very mixed to say the least and we had chilly nights, with rain during Sunday morning, and some amazingly warm sunshine during the Monday.  1st Wargrave arrived on the Saturday morning and set-up camp. After lunch the scouts participated in the first of the organised activities, and after cooking supper, a traditional camp fire was enjoyed and we performed our sketch “Wargrave’s Got Talent!”.

To keep warm during the afternoon and evenings we had our own local camp fire.  We soon discovered that a certain scout had a fascination with continually adding wood sourced from the wood pile, as well as prodding the fire at every opportunity and was soon nicknamed “Pyro-Joe”. Whilst cooking soup on a stove, Pyro-Joe even managed to set alight one of our t-towels!

On Sunday and Monday more activities followed, along with more cooking!  It was great to see our scouts mixed together in teams from other troops, allowing them to make new friends and work with boys and girls from other parts of the Loddon District.  The activities also allowed our leaders to meet and learn from other leaders, and we took away a number of new ideas that we plan to re-use in our programme. 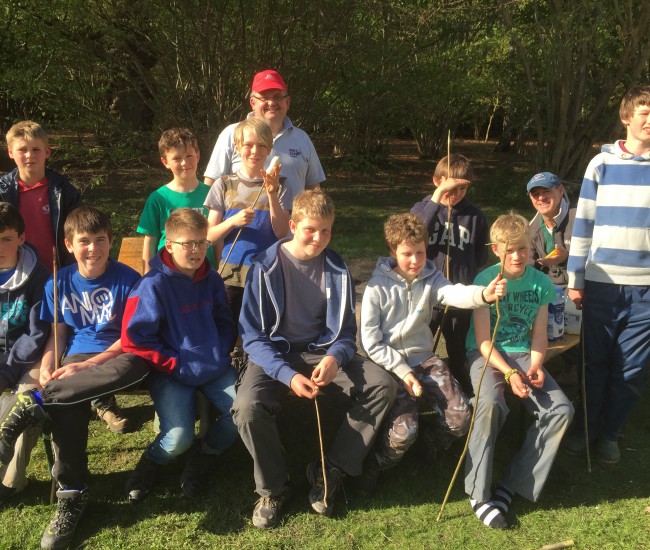 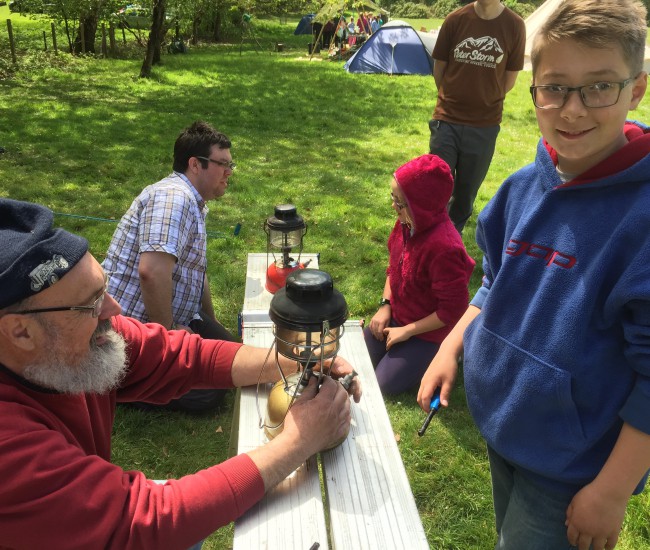 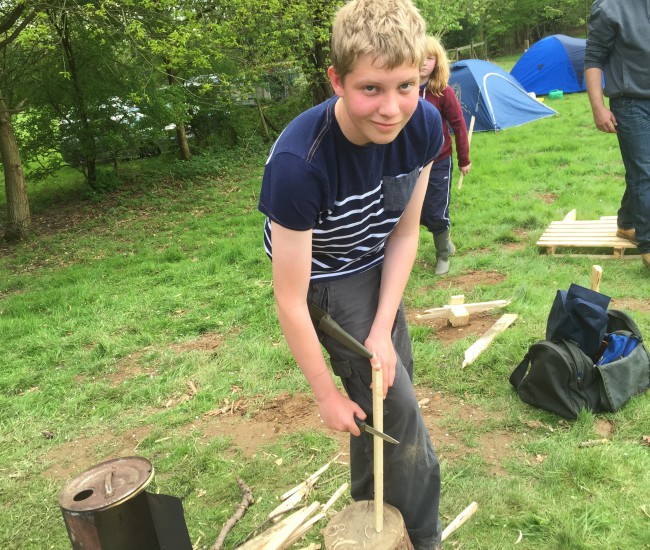 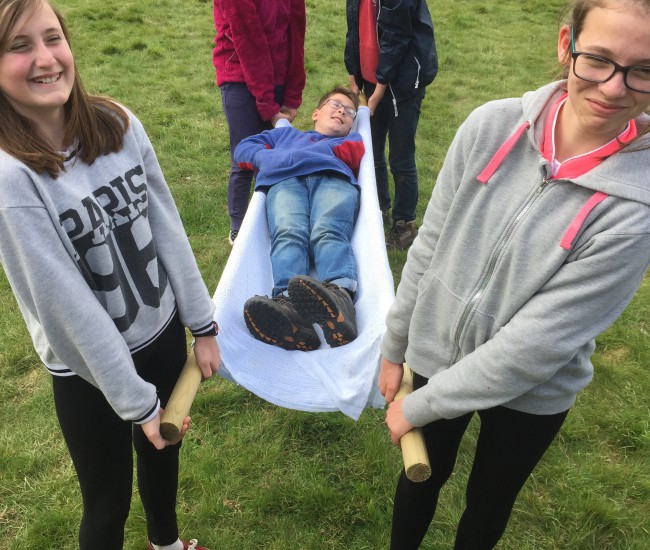 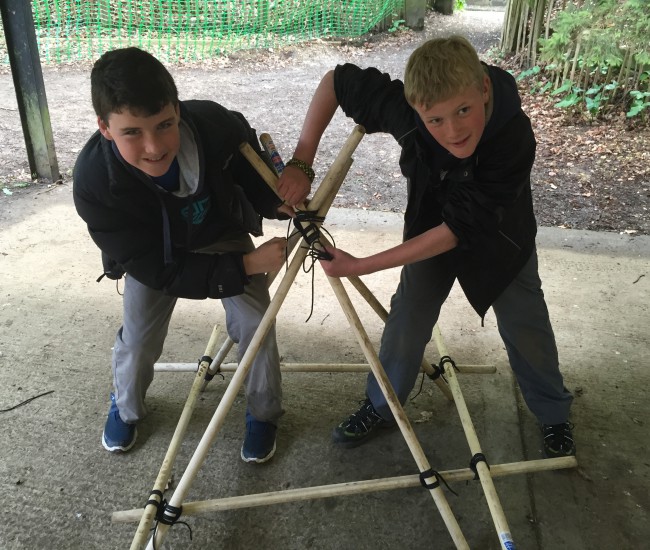 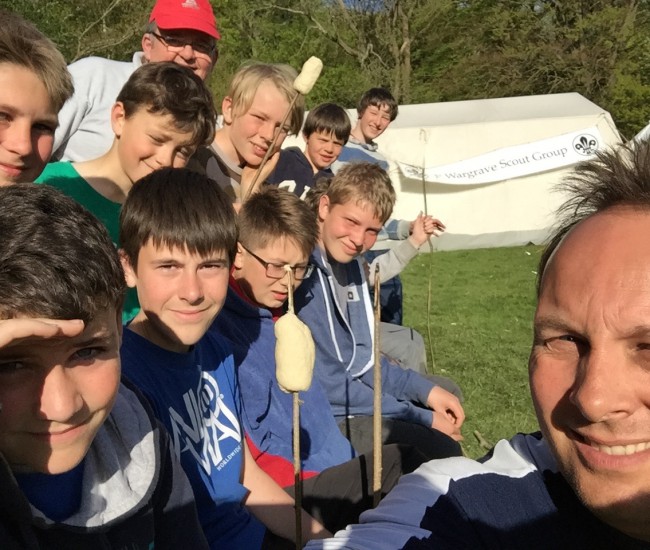 Participation in these activities counted towards the Scouts Outdoor Challenge Award.  Big Camp was very different to other 1st Wargrave Scout Camps in that the scouts prepared, cooked and washed-up for all of the meals, with just the leaders supervising.  A very welcome change from a leaders perspective!  The cooking part of the camp was extensively pre-planned and structured around a rota that enabled everyone to take part in all of the tasks.  This worked out really well and we intend to implement a similar rota for our future camps.

Some really tasty meals were cooked by the boys, and we even noticed a larger than normal consumption of fresh fruit and vegetables – which is always very pleasing!  Its amazing what you can grate into a Spag Bol and a Chicken Korma!

During the Loddon District Camping Challenge our site was visited by the judges a number of times over the weekend.  The competition involved not only adjudication of the scouts camping skills, cooking, cleanliness and tidiness throughout the weekend, but also took into account our camp fire entertainment sketch.  We were even scored on an additional task of cooking Welsh Cakes. 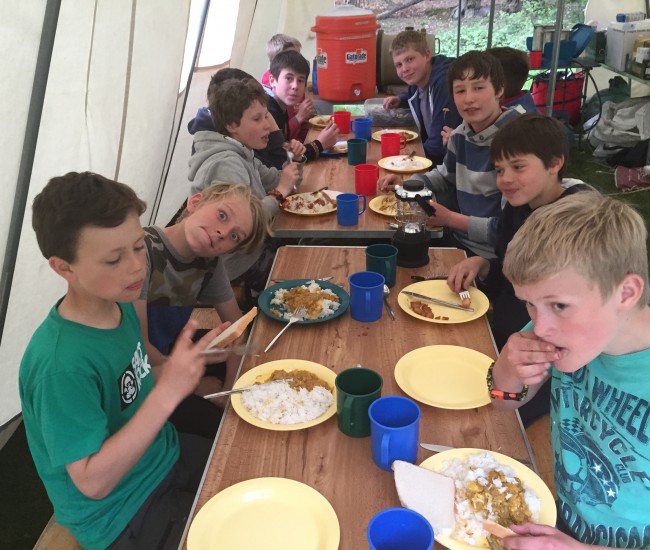 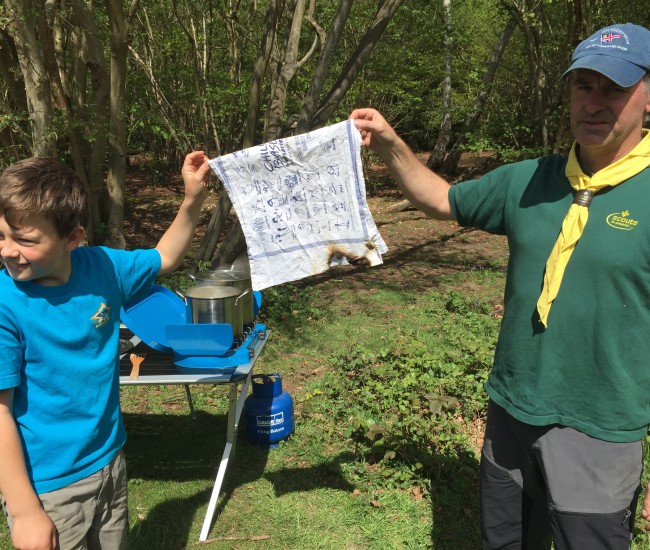 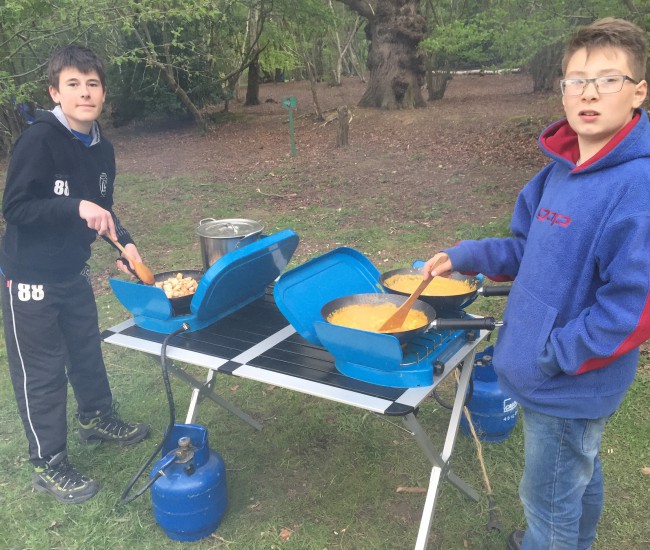 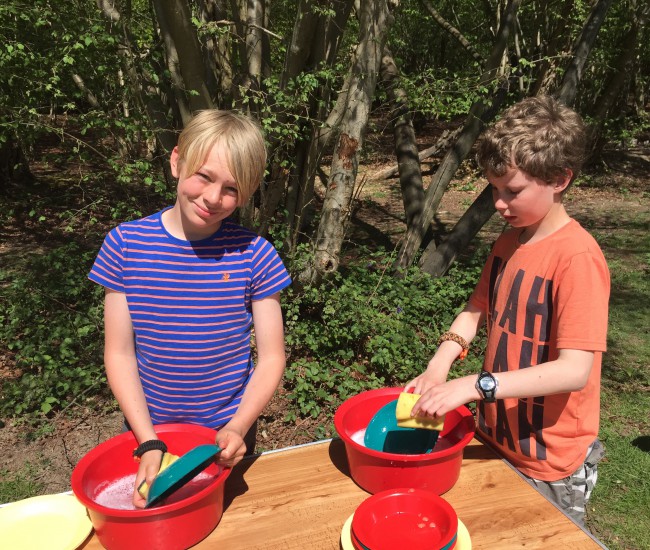 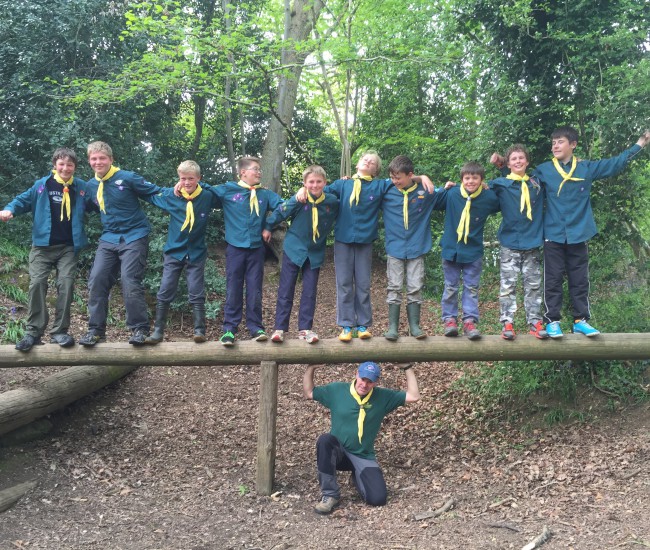 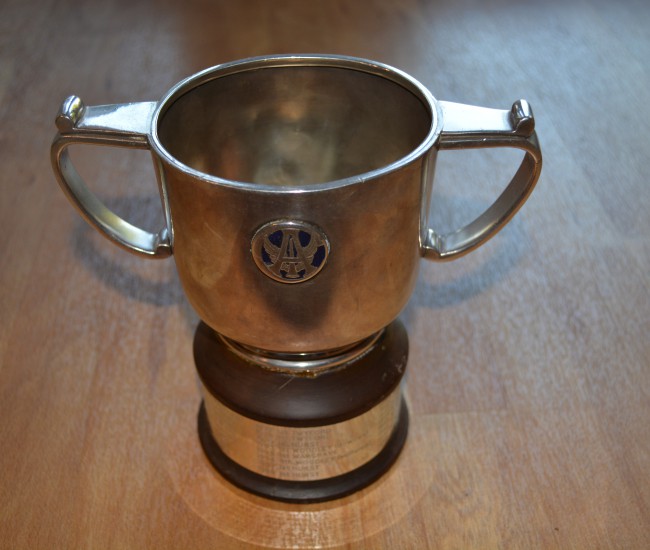 To our complete (and very pleasant) surprise, we were informed at the end of the camp that this years “Murray Plate Camping Challenge” was won jointly by 1st Wargrave and 5th Woodley!!  Our congratulations to the boys from both troops.  We plan to get the Trophy engraved and pass it over to them at the half-way point later in the year.

We received the Trophy in front of a number of parents that had come to pick-up their scouts, including our Group Scout Leader Pete Fry!  The 1st Wargrave Scout leadership team are incredibly proud of the scouts for this significant achievement. This is only the third time in the past 45 years that 1st Wargrave have won this trophy, the other times being 1985 and 1991.  This year 1st Wargrave were overall winners of the camp fire entertainment with the best sketch, and we came 6th in the Welsh Cakes. One of 1st Wargrave’s scouts (Joseph) was also in the winning Orienteering team.

The 2014/15 Murray Plate for the previous 12 months of events was presented to 1st Twyford (with 1st Wargrave finishing 8th out of 14 troops, see the results in the Google Doc tracked here). Our congratulations to 1st Twyford and to all of the other troops in the district that took part.

Well done 1st Wargrave Scouts!  So we have started the 2015/16 Murray Plate competition jointly in the lead – and we plan to try and stay there!  For Details of Loddon District events and our Monday evening activities, please see the Summer Term 2015 Programme.

Big Camp was extremely well run by a team of leaders from across the Loddon District and our thanks go to the many leaders that ran the activity sessions and adjudicated the event.  Special mention and appreciation is due to District Scout Leader Robert Kimber, Scouts District Secretary Chris Fido and Assistant District Commissioner Mark Ballard for a superb weekend which was thoroughly enjoyed by us all.