1st Wargrave Scout Group has been in existence since 1909, almost as long as the Scout movement itself.  Moves to establish a Scout group in the village began in December 1908, when Leonard Gower asked the curate, Revd Powley to help set up a troop in the village, which was duly formed on 24th February 1909. The troop members were enrolled on 31st March that year – Leonard being the first troop leader. 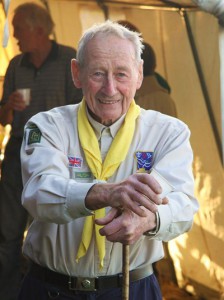 One of the troop’s most significant contributors in recent times was Buddy Rose, who gained his Scout Master’s certificate in 1947.  Some 60 years later in 2007, Buddy Rose was awarded the Silver Wolf.  The Silver Wolf is the highest award made by The Scout Association for services of the most exceptional character.  It is an unrestricted gift of the Chief Scout.

The award consists of a Silver Wolf suspended from a dark green and yellow neck ribbon. Buddy remained an active leader until 2009.  Scouting was Buddy’s life-long passion, and we all owe him a tremendous debt of gratitude for his commitment to 1st Wargrave over so many years.

Read more about our history on the Wargrave Local History Society website. Additional information about Buddy Rose and our 100 year ‘Air Guitar’ Birthday Party held in 2009 can be found on the Henley Standard website. 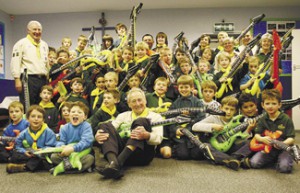 The Group firmly upholds the fundamentals of Scouting, which are summarised below: